Portable vs Standby Generators: Which One Should You Choose?

With or without connection to the grid, there are so many reasons to own or install an electric generator. They’re useful in your countryside home, for picnicking, caravanning, as a backup when the public supply is down, during emergencies, for commercial organizations such as hospitals, etc. The fossil fuel-powered electric generators are available in different types, designs, sizes, and can be categorized into two: portable and standby generators. One of the similarities between these types of generators includes that they use the same fuels: diesel, gasoline, propane, and natural gas. But what are the differences between them?

In this portable vs. standby generators comparison article, we’ll see what differentiates the two and which one will be suitable for you. Generally, the main differences lie in the fact that the portable generators are more transportable, quieter, less-powerful than the standby generators. However, we’ll go further by analyzing the advantages and disadvantages before comparing their features head-to-head.

Portable generators, like their names suggest, are electrical power equipment that can be easily moved or carried from one location to the other. The most popular types are the compact ultra-quiet inverter generators and the open-frame conventional generators.

These generators usually have small to medium tank sizes ranging from 0.9 to 20-gallon capacity and run on diesel, gasoline, propane, or natural gas. However, some new dual-fuel models are designed to use gasoline and propane.

But are all ‘portable’ generators really portable? Well, not all portable generators are portable. Some weigh more than 150 pounds and are very large in dimensions. The features which make them portable include their large wheels and carry handles, which make them qualified to be categorized among the “portable” models.

These types of generators can be used in residential homes, at construction sites, and for outdoor recreational use. Their output power ranges from around 1,000 to 25,000 watts. Portable generators with an output of around 1000W to 2500W usually have an easy-grip handle to take them with you anywhere, and their dry weight is usually less than 50 pounds. For example, the WEN 56200i generator weighs 48 pounds, while Honda EU2200i weighs around 40 pounds.

These types of generators are ideal for use in organizations that need an uninterrupted power supply as they can start automatically, thanks to a transfer switch. In the event of a power outage in a hospital, for example, they can start instantly. Hence, they are the most reliable type of backup. According to most reviews, home standby generators designed by Generac, are by far the most reliable and time-proven ones.

We pitch both types of generators side by side to see how they compare, using criteria such as the power output, fuel consumption, price, versatility, and more.

However, the standby generator remains the winner here.

Most portable generators consume less fuel than standby generators, but that is at lesser power output. However, if you’ve decided to go for a standby model, you get better fuel efficiency. Standby generators usually use diesel, propane, and natural gas.  Diesel costs an average of $2.7 per gallon, as of January 18, 2021 Trusted Source Gasoline and Diesel Fuel Update - U.S. Energy Information Administration (EIA) Energy Information Administration – EIA – Official Energy Statistics from the U.S. Government. www.eia.gov , according to the EIA. However, natural gas is $1.5 to $2 cheaper than the equivalent of gasoline per gallon. The cost of diesel per gallon may be more expensive than gasoline, but this is offset by the higher output per gallon generated by standby generators.

However, the only advantage with portable generators is that the gasoline and propane-powered models produce cleaner power while emitting lower noise.

Standby generators are however more fuel-efficient.

Winner: Portable generators win this one. 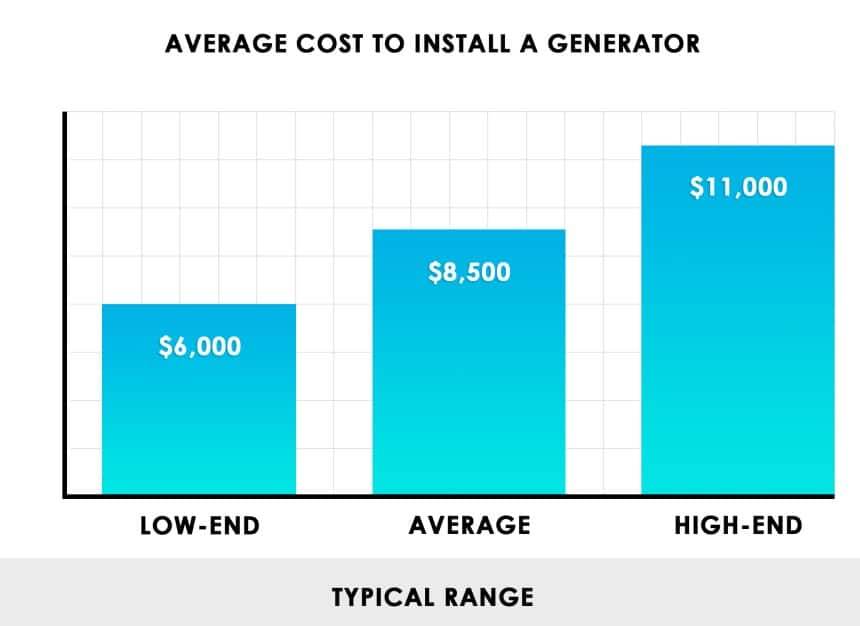 Portable generators are more versatile. You can deploy them for residential, RV, and outdoor use. You can push a portable generator to the field to supply power for mowing the lawn for example. You can even use it to provide power to charge your smartphones, laptops, and also power your BBQ grill while out camping in a remote area.

Even large and heavy generators can be portable if you attach wheels to them. Some come with a wheel kit, while others require you to buy one.

Meanwhile, portable generators have fuel tank capacities that range from less than one gallon to around 20 gallons or more. However, there are different tanks for standby generators.

The fuel tanks built into standby generators have a starting capacity of around 60 gallons.

Sub-base fuel tanks have around 100 to 3,000-gallon capacity and can last weeks of use, if not months, depending on the frequency of use.

With standby generators, there is less risk of carbon monoxide as this generator type producer fewer of this deadly gas, compared to conventional portable generators. Also, standby generators eliminate this risk because they’re oftentimes installed outdoors.

Portable generators, however, have safety features such as overload protection and low-oil shutdown features which protect the life of the engine.

This is a tie.

Portable generators come largely almost completely assembled. You may however need to install the wheels, battery, and  handles. This can be completed by yourself with no additional help by following instructions in the product manual.

1.
Standby Generators- Do You Need a Standby Generator?
A standby generator can energize a house for days after a blackout. Here's how to know if a standby generator is a good investment.
www.popularmechanics.com
2.
Gasoline and Diesel Fuel Update - U.S. Energy Information Administration (EIA)
Energy Information Administration – EIA – Official Energy Statistics from the U.S. Government.
www.eia.gov