About Us
Home » Electricity » Generators

The list of powerful and durable diesel generators that easily power your electric appliances when you need it most.
By
Charles Brown

Diesel generators are like an insurance policy. You hope you never need to use it but it’s there when you do. Whether it’s for a power outage or a construction site, a diesel generator can be a lifesaver.

Our team has put together a list of 3 best diesel generators on the market and chosen DuroStar DS7000Q as a top pick. Diesel generators are quite rare, but the features to take into account are the same as with other generator types. The first is the engine as it’s the most important part. We looked for models with reliable and powerful engines. A four-cycle engine is the best to consider because it allows smooth operation. Fuel consumption is the next important factor as you don’t want a generator that will quickly use up all the fuel.  Another important factor to take note of is the power output of a diesel generator; the power output determines the number of electrical appliances a machine can power depending on the rating of such a machine. Tank volume also matters as you don’t want to refuel the generator too often so we included the models with at least 3.83 gal. tank. Last but not least is a runtime. In our review, you can find a model with an impressive 32.4-hour run time.

DuroStar DS7000Q is a diesel generator that is ideal for almost every situation you find yourself from emergency power outages in your homes to the high demand of power supply in farms, maintenance and construction sites and so on.

The diesel generator operates with a four-cycle air cooled, single cylinder diesel engine that makes use of a very advanced system for fuel injection that reduces the rate at which fuel is being consumed. It boasts of peak power of 6,000W and a constant of 5,500W. It comes in a fully enclosed frame and has a soundproof feature as well as a super quiet muffler. These features help the DuroStar DS7000Q diesel generator in noise reduction and smooth operation.

The electrical part of the generator is packed with a durable and reliable alternator with an automatic voltage regulator to step down or step up an anomaly in power generated. The power panel features the main controls, including a start switch, volt meter, and circuit breaker. It offers two 120-volt, 20-amp, 3-prong outlets (with ground fault interrupter) to supply power to all your home appliances, plus two twist-lock outlets for high-powered tools: one 120-volt, 30-amp, 3-prong outlet, and one 120/240-volt, 30-amp, 4-prong outlet.

The generator is backed by a 1-year limited warranty.

What is not ideal about it?

Probably the best thing about this diesel generator is that it is more efficient and provides consumers with a long-life span. It comes with the Yanmar LW Series 435cc air-cooled direct injection, EPA Tier IV, industrial grade engine. It has less than 6% total harmonic distortion for the clean and smooth operation of sensitive electronics, tools, and applications.

The generator boasts a 12-gallon fuel tank with a fuel gauge that provides a long runtime of 32.4 hours at 1/2 load. The compression release lever provides easier starting during cold ambient temperatures. It also comes with a feature called the “low oil pressure shutdown” that enables the system to shut down when it is low on oil pressure that automatically safeguards the engine from damage.

The generator also comes with a fuel primer bulb that provides quicker starts when the fuel tank has previously run empty. The generator itself is highly durable and welded with steel frame. It has an Integrated Lifting Eye which provides easy transport and security in the location where it is placed.

A great advantage of this generator is that its 120/240V selector switch provides full 120V power, or you can switch it to 240 V if you need. The single touch electric start provides hassle-free start up whereas the battery is not included. Finally, it has the hour meter feature along with maintenance resets tracks usage and monitors maintenance cycles. It also comes with an additional corded electric power source.

What are its best features?

What could be improved?

powerful generator like this is a Liquid Discharge Eject Generator type revolving field. It has two poles and a self-excitation frequency measured in Hertz(Hz) of about 60Hz. It boasts a power output measured in KiloWatts(kW) of 5.5 or 5,500W. The alternating current Voltage measured in Volts(V) is rated between 110V to 220V.

Its operation is very good due to the speed at which the engine works; it boasts of an engine speed of about 3,600 revolutions per minute. Also, it comes with a direct injection system as the engine is in a vertical alignment and a four-cycle, air-cooled diesel displacement.

The starting system which is the electrical system comes with a battery for ignition purposes. The generator has Single Phase Power Factor 1. The excitation system is a controlled self-excitation. The coupling pattern is a starting shaft coupling engine. Lubricating oil is at zero degrees in summer or negative twenty degrees in winter. A standard fuel gauge with Voltmeter, AC Circuit Breaker, Engine Switch, DC Output 1V/8.3A, Low oil alert, AC socket with handle and wheel come with the purchase.

What are our favorite features?

What could be better?

Pros and cons of diesel generators

It is also observed with diesel generators that they tend to outlast the gasoline generators when performing the same amount of work. They do the same workload and do not burn as much fuel as the gas generators. The fuel itself is also lower priced when compared to gasoline and propane fuel. 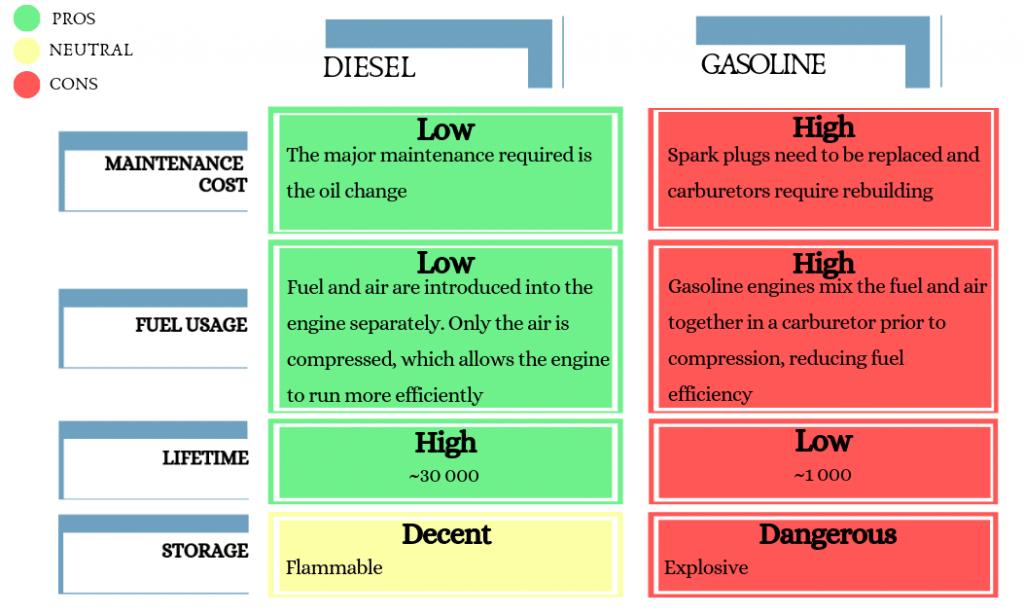 Diesel fuel is also much better to store than gasoline. It is flammable, but it is not as great a risk as gasoline can be explosive. The exhaust of the diesel engine is, in fact, more visible, and this is considered one of the major downfalls of diesel as a fuel. However, if the diesel generator is properly maintained, there will be no need to be concerned as the exhaust will be minimally visible only when the generator is pressured under load changes that are severe.

Diesel can be very noisy, and this is considered to be a great downfall of the diesel system. This is usually one of the reasons homeowners tend to opt for gasoline generators. The gasoline generator is much less noisy than the diesel generator, and therefore there is no need for the generator to be placed far away from houses. There are other options available now such as soundproof enclosures that can assist with this issue.

What to look for in an ideal diesel generator?

As we mentioned above, the major features of diesel generators are pretty much the same as other generator types. Let’s discuss them in more detail. 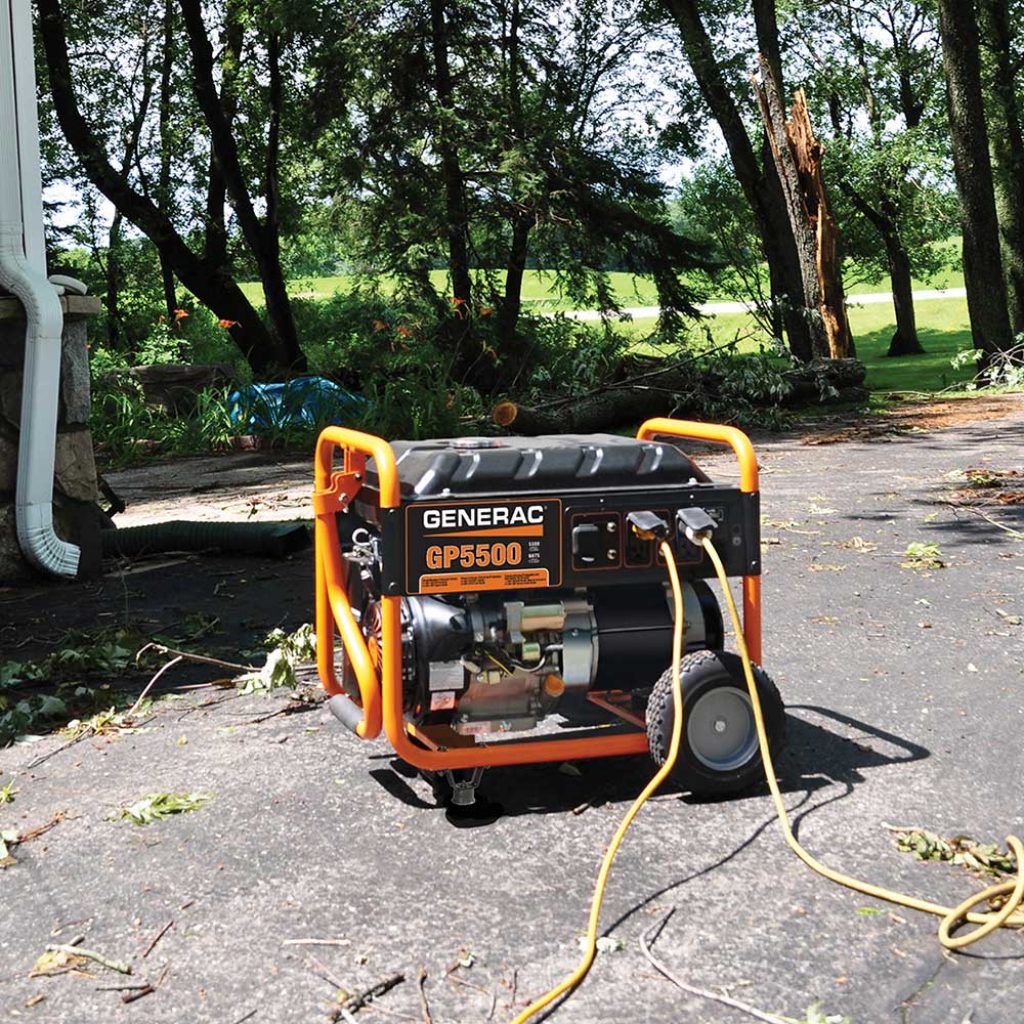 The power of the engine of any diesel generator is to be noted because of the amount of load the engine can carry depends solely on the power generated in the engine. In most cases where a particular diesel engine generates less power than required, it becomes so frustrating for the user and may lead to damage to the diesel generator.  A four-cycle engine is the best to consider because it allows smooth operation in diesel generators.

The size of a diesel generator varies depending on the structure of the generator and the manufacturer. Know how much space you have before getting a diesel generator so as not to have any issues with space. The DuroStar DS7000Q and SIGMA 7000W take more space compared to the Generac 6864.

The warranty of products depends on the manufacturer. Warranty allows you to return a certain good back to where you purchased it from if it develops any fault within the warranty period. Warranty could go for as long as a year or even more in some cases.

How to use a diesel generator safely?

All installation, repairs, and maintenance should always be in accordance with the instruction manual made by the manufacturer or rather still if you are having complications, call an expert.

The fumes emitted by the diesel generator which contain deadly and poisonous gases such as carbon monoxide (CO) are very dangerous and deadly to the human health. The exhaust systems should be installed by professionals, so proper installations can be made, and there should also be very good ventilation to make sure there is no blocking of the flow of the air in the cooling system. The direction of the exhaust pipes must also face the direction where people are not concentrated.

The generator should be kept in a location far away from inhabited zones and from materials that are combustible.

What do I need to start a generator?

Firstly, check whether the water tank is filled with water. During winter, be sure to check the antifreeze level if full. After these, check for the oil level, fuel level, and the radiator water level. Make sure to add the right amount if the level of any is lower than the standard level. Check if all electrical connections are properly connected. Also, be sure there is no leakage and no dirt or blockage in the exhaust. The last but not the least is to make sure the battery and voltage are normal. With all these, you are ready to start a generator.

What generator should I choose for the winter?

During winter, you use a diesel generator more often than other weather conditions to keep the diesel generator warm enough. Always make sure your antifreeze level is up always. Examples of generators you could use during the winter period are the DuroStar DS7000Q due to the fact that it can run for a long time at about 12 hours on a half load. The DuroStar DS7000Q is also remote controlled which means you do not have to go outside in the winter to switch on or off. Generally, it is best the diesel engine is in check all times.

What units can I use outdoors even when it’s raining?

How to calculate how much power I need?

How do I know that something bad happened with my generator?

Overall, the DuroStar DS7000Q comes in first place due to the fact that it has some awesome cool features, not too expensive and as well generates enough power. It makes us list it as the best all round. The SIGMA 7000W takes an overall rating of 8.7 with good enough specifications and features. Coupled with the fact that it is not expensive, it caters to all other areas where it does not play too well. We made the SIGMA 7000W our budget pick.  Finally, the Generac 6864 boasts of an overall rating of 9.0 with high durability and a very long runtime at 32.4 hours with a half load. However, the price makes it not budget friendly.

pinterest
Related Articles
Generator vs Alternator: Spotting the Difference
Why Your Generator Won’t Start: Possible Problems Resolved
Is Backfeeding Generator Illegal?
6 Best Whole House Generators – Backup Power for Your Home (Summer 2022)
Generator Exhaust Extension: How to Make It and Use It Right
Generator Runs for a Few Seconds and Then Stops: Possible Reasons and Ways to Fix It
Leave a Reply Cancel reply
Experts Advise
1
generator vs alternator
2
generator exhaust extension
3
generator wont start
4
how long can a generator run
5
how to ground a generator
More Research on Generators
what is carb compliance
Most popular
2
10000 watt generator
3
generators
4
tailgating generator
5
generator for boat
Navigation